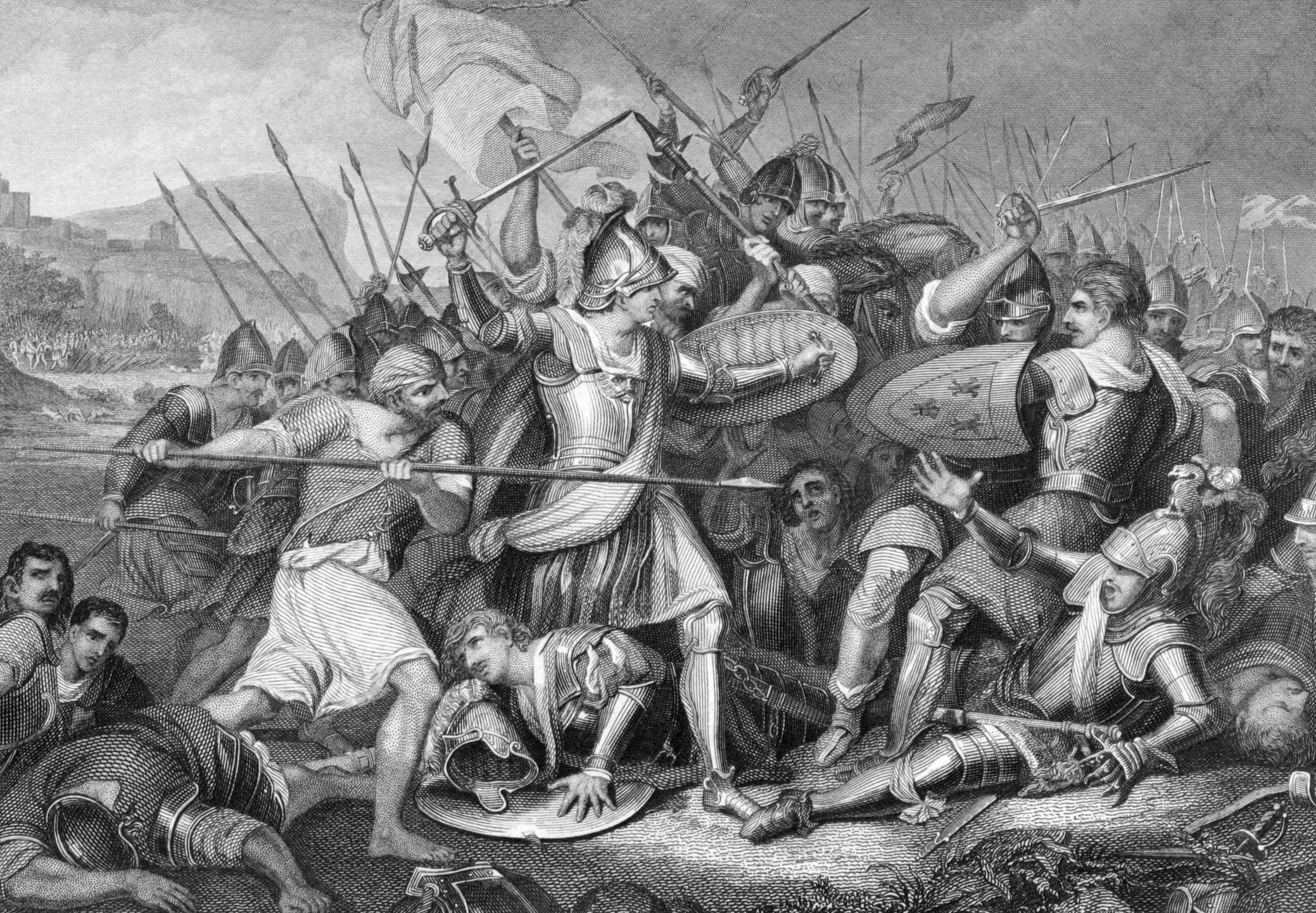 Battle of Agincourt in 1415 on engraving from the 1800s. Major English victory against a numerically superior French army in the Hundred Years War. Engraved by J.Rogers after a painting by J.H.Mortimer and published by J.& F.Tallis.

What makes a successful business leader?

I want to approach this question with a story from history, a story so great that Shakespeare used it in one of his plays. Even though I have a twang to my accent and sound rather Australian at times, those who know me well know that I’m originally from England, Great Britain or “Old Blighty” (a term used by WWI British soldiers when longing for their homeland). In England, we have a rich history that dates back thousands of years, and we like to bring up stories as analogies from time to time. So my story here is focused on a very famous English battle with the French. The Battle of Agincourt, made famous by Shakespeare in his play Henry V, was not a pivotal battle in terms of changing the direction of European history, but it was an extreme case of the underdog winning over immense odds. For that reason, it is one of the most revered stories by the British (not the French) of what happened on October 25th, “Saint Crispin’s Day,” in 1415.

So the story goes: King Henry V of England had been pursuing a campaign against King Charles VI of France for France’s throne by a hereditary claim from his great-grandfather. In those days, this was a ploy to convince France to give the English the claims to certain French regions, and if the prior 10 years’ negotiations had worked, then that’s probably what would have happened. However, King Charles VI, who suffered from mental illness and was known as “the Mad,” did not comply. Maybe that’s why negotiations failed and forced the English King to pursue war with France.

Henry V started his campaign from the northern coast of France in an attempt to sack the port of Harfleur. The siege took longer than the English expected and disease set into the English camp, making their numbers dwindle before the town was finally taken. Winter was now coming but rather than retreating to England, the King decided that he would march an estimated small number of 6,000 troops through Normandy to the English-held town of Calais in a display of defiance to the French King. In the meantime, the French raised a considerable army, an estimated 36,000 French men-at-arms. They marched north to meet the English, forcing them to veer away from Calais and cross the Somme river. The English were tired of marching, sick from dysentery and low on numbers, but on October 24th, the two opposing armies met and came to a standoff at Agincourt. The next day, the English started to advance on the battlefield.

What happened next is immortalized in Shakespeare’s word in Henry V when the King gives his heroic speech:

“From this day to the ending of the world, 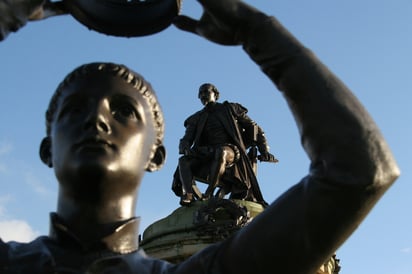 But we in it shall be remember'd;

We few, we happy few, we band of brothers;

For he to-day that sheds his blood with me

Shall be my brother; be he ne'er so vile,

This day shall gentle his condition:

And gentlemen in England now a-bed

Shall think themselves accursed they were not here,

And hold their manhoods cheap whiles any speaks

That fought with us upon Saint Crispin's day.”

This Henry V Shakespeare leadership quote brings me to an important lesson regarding leadership in business through the influential actions Henry V impressed upon his troops. This quote is often used by others as motivation because of the deeply rooted message stressing the importance of a quality leader who stands alongside their team.

“We few, we happy few, we band of brothers; For he to-day that sheds his blood with me shall be my brother…”

Translation: The leader isn’t just a leader standing off by themselves watching the action. A quality leader stands right alongside their team facing the challenges with them.

“And gentlemen in England now a-bed shall think themselves accursed they were not here, and hold their manhoods cheap whiles any speaks that fought with us…”

Translation: People who aren’t part of the team will feel envious when team members speak of the team and what they accomplished. Having a team that others are envious of is a strong sign of quality leadership.

The French lacked what the English had: true leadership that Henry V brought to his men as he stood side-by-side with them in battle. Before the battle began, he provided his motivational speech, thus bringing them a stronger unity. This was in stark contrast to King Charles VI, who stayed at home with his ailments and let his many noblemen unsuccessfully manage his armies. The French stood by while Henry V marched roughly 5,000 longbowmen, revered in their day as highly trained marksmen, to within 200 paces of the French front line. Instead of the French armies attacking, they quibbled about who was in charge, none of them wanting to be the one to decide to attack. The longbowmen unleashed an unholy barrage of arrows to the French lines, leading to a mound of French dead bodies that hindered the advancing ranks of French infantry behind.

Just as Henry V behaved in the thick of the fight, you too need to show your team that you are there for them. 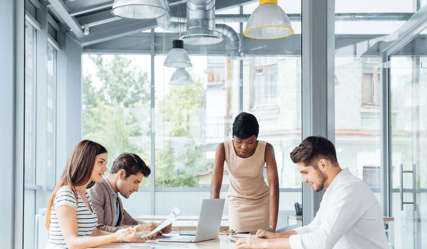 Don’t be like Charles VI, hiding yourself away in your office or in the minutiae of your business. Rather, spend time with your people and understand their difficulties and needs. Show them you can do what you are asking them to do and find ways to convey your enthusiasm for getting the job done. Ask them, “How can I serve you? What do you need to get the job done, and how can things be done better?”

2. Strategize to set the vision and direction for your organization.

King Henry V had a strategic mind, and this led to his victory over the French. In the battle of Agincourt, the weather played a big factor in this battle. Henry V strategically stopped his army on a field that forced the French to go through a fallow field for their intercept of the English. It had rained the day before, which caused a terribly muddy battlefield for the majority of French troops who were all heavily armored, some on horseback, wielding heavy swords, and subsequently found it extremely hard to maneuver in the thick mud of the battlefield. In contrast, Henry V had the strategic foresight to use the longbow, which was light in weight and fired more quickly at a greater range. Over 80% of the English troops were longbowmen dressed in light armor, who were armed with a longbow and small axe and therefore were nimbler and quicker in the muddy conditions.

To make things worse, the French lines were many men deep, and they continued to push from the back, tightly packing their own men, which made it impossible to wield their swords and other weapons. This was a fatal leadership failure, as it caused the French lines to push their heavily laden brothers in arms into the mound of bodies created by the English arrows. Thus, they stumbled to the slaughter by the free-wielding longbowmen with their hand axes after all their arrows were gone. The French underestimated the longbowmen’s ability with the axe and hand-to-hand combat, which coupled with the poor ground conditions made for a very bad day. This lack of strategy in understanding the battle conditions and severe lack of leadership cost the French dearly. They turned up with an estimated six times the men and, in some claims, they ended having six times the losses. Regardless of the numbers, and historically there are many differing accounts, the French suffered huge losses and did surrender to Henry V on the battlefield of Agincourt. He took prisoners and marched on to Calais, where he went back to England to a hero's welcome.

Don’t drive your business around without a destination, dragging your employees with you in the passenger seats without an idea of where they are going and why. One of the big failings of the French at Agincourt was the lack of strategy. While their lines were being pounded by English arrows, the noblemen were arguing about where to attack, who should make the call and which of them should go first. Having a vision and strategy for your business will ensure that everyone in your organization (including you) is aligned to a single outcome. Everyone should know why they are doing what they are doing.

3. Make good decisions by having expert advisors and mentors.

Get good advice and get it frequently. Henry V surrounded himself with great warriors, his noblemen being some of the most renowned knights in Europe of the time. They were great strategists, and Henry V was fortunate and wise enough to court their advice. It certainly showed. It’s rumored that Sir Thomas Erpingham, the English knight who became famous as the commander of the King’s longbowmen in Shakespeare’s play, told his men to wait for the French push and to step back one pace right at the critical moment. This caused the French line to stumble again and perpetuated the problem for the French. This was one of many strategies that Henry’s men incorporated to win against great odds and was a testament to Henry V’s leadership as a king in battle.

4. Delegate so you can focus on the big stuff.

Once you have conveyed your enthusiasm to your employees, you need to delegate to them. No leader is made if they cannot delegate. Henry V trusted his noblemen and delegated the responsibility for leading the different parts of the battle to them. Same goes for you. There are many tasks in a business and it doesn’t make sense for you to do them all or micromanage them. Define the what and the how so they can function and let your team get on with it. Train, Empower, Equip (with processes and resources) and Inspire your people so they can do a great job: if you do this, you will be rewarded with a business that has the potential to scale and make more money.

The moral of this story is that leadership is what makes a business successful. Business can be like a battle sometimes. You have to motivate your troops and lead them into that battle with confidence and a strong strategy. Remember, to have a strong business leadership style, you must lead by example, strategize to set the vision and direction for your organization, make good decisions by having expert advisors and mentors, and delegate so you can focus on the big stuff. So keep these 4 lessons in mind as you progress in your business and remember that strong, smart leadership is the key to success.